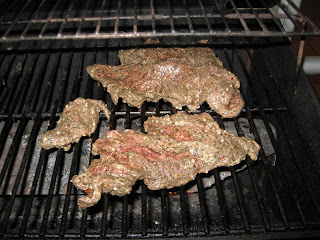 I really had no idea what I was buying when I came upon something labeled "carne asada" when I was at the grocery store. But I love carne asada from my favorite Mexican place, and the cashier said they were really popular, so I figured it would be a fun experiment.

I did some research and found some marinade recipes that looked worth trying. Then I get my meat out of the fridge and realize the reason this carne asada is so good is it is basically already marinating in there. Darn. So I stuck it in a marinade for the day anyway (after all, I'd already taken the ingredients picture) and grilled it up that night. This was before my deck and grill were covered in 2 feet of snow, but anyway, it was delicious. I don't think my marinade had anything to do with it, but it was good and pretty spicy. Tender and flavorful. The one reason I'd buy this again is that it's hard to find meat cut so thin already, which was a real plus. The downside (hey, they're not PAYING me for this review) was that some of bites were kind of fatty; it didn't seem all that well trimmed. But I would definitely buy it again! I guess since I'm labeling this as a product review, it is the Safeway Select brand of carne asada.

For the record, after I took the above pictured meat off the grill I realized it was actually still "folded" in half so I unfolded it and threw it back on the grill for another minute or two.

In case you buy some sort of meat that is NOT already marinated, here's what I used: 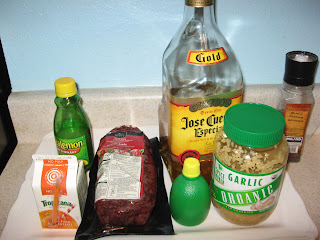 about 1/2 cup tequila
about 1/4 cup each lime and lemon juice
a generous spoonful or two of minced garlic
salt & pepper
I pictured the orange juice but didn't end up using it. Some online recipes used it but after realizing the meat was already seasoned, it seemed like a bit much
Mix ingredients in bowl or zip-top bag and marinate. Grill until done (my  meat was cut so thin it only took a few minutes). I will try this again with unseasoned meat but with the kind I bought, it was unnecessary.