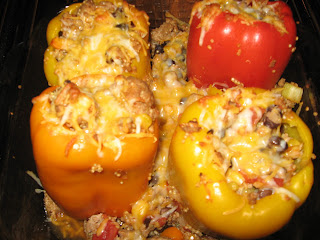 There are a lot of recipes for stuffed bell peppers out there, but I wanted to create one without rice. If you like rice of course you could mix some in.

Don't you hate it when you stuff the peppers and they tip over and spill all over everything? Check out this nifty tip: carefully slice off the bottoms of the peppers to make them flatter on the bottom! (The red pepper is an example of a not-so-carefully sliced bottom!) 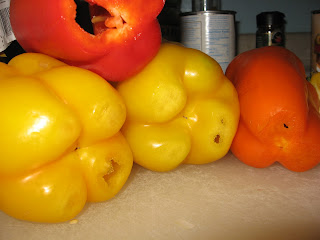 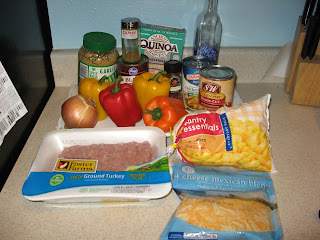 What to do:
Start the quinoa first. Don't be scared if you've never used it before-it's easy and mild. Do make sure you rinse it if it doesn't say pre-rinsed on the box, or if you get it in bulk. It can taste kind of soapy otherwise! So combine 1 C. chicken broth and 1/2 C quinoa in a small pot. Bring to a boil, cover, and simmer for about 15 minutes. You'll know when it's done, it kind of pops and is round with a little ring around it. P.S. Quinoa is about the most impossible thing to photograph, ever! 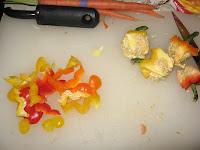 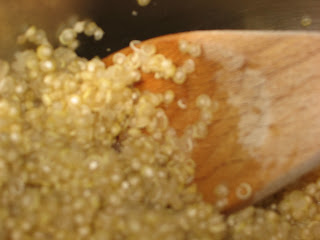 Prepare the peppers, as shown. Keep the tops and bottoms and dice them up.

While the quinoa is cooking, brown the ground turkey and drain off fat. Add onion, garlic, carrots, celery, peppers, mushrooms until slightly softened. Add everything else but shredded cheese and heat til warm. When the quinoa is done, stir it in too. Oh, by the way, use a BIG pan! 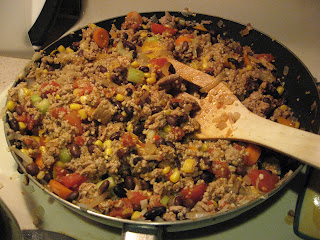 Place peppers into sprayed baking dish. Fill with filling, add more filling around the peppers, and top with cheese. Bake, covered lightly with foil, at 350 for about 20 minutes. Then remove the foil and bake for a few more minutes. 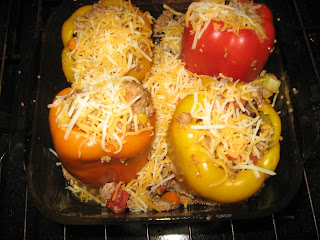 Since everything is already cooked, all the baking really does is soften the peppers and melt the cheese. If you like really soft peppers, you can pre-bake them (empty) or boil for a few minutes. I like mine a little more crisp! 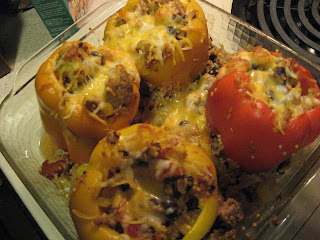 Take out, let cool, decide there isn't enough cheese and add a bit more, and enjoy!

Unless you make 6-8 peppers, you'll have tons of leftovers. Fear not! It's great heated over some lettuce as a salad, or on its own!